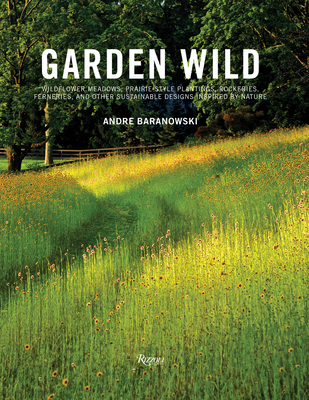 This book is a survey of 12 breathtakingly beautiful gardens by award-winning photographer Andre Baranowski, whose eye for beauty will embolden readers the world over to embrace their inner instincts and create their own garden wild.

The new movement in contemporary gardening is about going back to the wilderness, creatively landscaping with native plants to enrich their environments and seamlessly merge with their natural surroundings. Politely rejecting traditional manicured, hedged and pruned gardening aesthetics to invite an alternative kind of beauty: wildly bursting with indigenous plants, old-growth trees, vibrant patches of wildflowers and perennials, succulents, un-pruned bushes and ornamental grasses. New York City's Highline is a famous example and this landscaping approach is becoming increasingly popular for private homeowners. This book surveys twelve such breathtaking gardens captured by award winning photographer Andre Baranowski. The featured gardens range from small private residencies to large properties, by renowned landscapers such as Oehme van Sweden, Fernando Caruncho, Jorge Sanchez, and Piet Oudolf. The texts detail each project's approach and the hurdles presented by its landscape, providing the reader with an array of instructional ideas from an insider's mindset. Guaranteed to be a boundless source of inspiration and treasured by lovers of gardens worldwide.

Andre Baranowski is an award-winning editorial and advertising photographer. His work has appeared on the covers of the most prominent gardening and lifestyle publications, including Better Homes & Gardens and Departure. Baranowski frequently photographs for the National Landscape Foundation and the Garden Conservancy, and his work was part of "The New American Garden" exhibit at the National Building Museum in Washington, D.C.
Ms. Dorothy Kalins serves as editor and advisor at How2Media Inc. She was the founding editor-in-chief of Metropolitan Home and Saveur, the executive and contributing editor of Newsweek, and was responsible for the re-launch of Garden Design. She was the first woman to be named Adweek's Editor of the Year and in 1999 and awarded the prestigious Matrix Award.